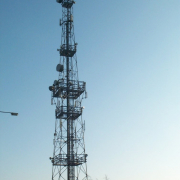 Cell-Site Analysis is an investigative technique which is commonly performed to determine the location and movements of a mobile phone. This is possible through the communication a cellular capable device (such as a mobile phone) has with its network provider.

To expand, whenever a mobile phone is powered on, it will begin relaying signals between the phone and the surrounding ‘network equipment’ (fixed-place antennas commonly referred to as ‘cells’). If the mobile phone has a registered SIM card attached to it, the corresponding network operator for the SIM will allow the mobile phone to ‘route’ communications through these ‘cells’.

It is the intention of the network operators to provide coverage to all of its subscribers; because of this, these cells surround us at almost all times so subscribers can use their mobile phones to perform ‘call-events’ such as voice calls, text messages and accessing internet-based services.

When a mobile phone generates a call-event (whether incoming or outgoing), the cell which provides the ‘best’ service at that particular time is used to handle that event. When this happens, the network will record the various details of the call-event which includes (but is not limited to):

This information is stored within the mobile phones ‘Call Data Record’ (CDR) which in turn provides the analyst with a list of a mobile phones historical connections to cell-sites. These CDRs are then analysed and cross referenced against external measurements, intelligence and evidential data to narrow the possible locations for a mobile phone whilst within the coverage area of the utilised cell-sites at specific times or within specific periods.

The ‘external measurements’ referred to is data collected during Radio Frequency (RF) surveys which involves using specialist test equipment to monitor and measure the mobile phone network while tracking its own location using GPS. The resulting data can then be used to determine the service area of a particular cell.

However, as cells are typically designed to provide service to areas, a cell could provide service to multiple locations within the defined area of a particular cell. Therefore, intelligence and evidential data in the form or witness sightings, significant events, data contained within the mobile phone and ‘alibis’ are considered to determine whether the call-event sequencing within the target phones CDR matches a timeline of purported events.

When and where possible, these external factors should be considered as they potentially change the circumstances regarding the mobile phone in question. For instance:

Additionally, whilst Cell-Site evidence is commonly used to provide location and movement analysis, Cell-Site evidence can also be used to identify communication (or lack thereof) between individuals/groups to establish a connection to, or refute any association to, a larger criminal organisation.

SYTECH has a proven history of being able to interpret Cell-Site evidence in a coherent manner to the Prosecution, Defence and ultimately, the members of the Court during trial proceedings.

This site uses cookies. By continuing to browse the site, you are agreeing to our use of cookies and that you are above the age of 13 years.

We may request cookies to be set on your device. We use cookies to let us know when you visit our websites, how you interact with us, to enrich your user experience, and to customize your relationship with our website.

Click on the different category headings to find out more. You can also change some of your preferences. Note that blocking some types of cookies may impact your experience on our websites and the services we are able to offer.

These cookies are strictly necessary to provide you with services available through our website and to use some of its features.

Because these cookies are strictly necessary to deliver the website, refuseing them will have impact how our site functions. You always can block or delete cookies by changing your browser settings and force blocking all cookies on this website. But this will always prompt you to accept/refuse cookies when revisiting our site.

We fully respect if you want to refuse cookies but to avoid asking you again and again kindly allow us to store a cookie for that. You are free to opt out any time or opt in for other cookies to get a better experience. If you refuse cookies we will remove all set cookies in our domain.

We provide you with a list of stored cookies on your computer in our domain so you can check what we stored. Due to security reasons we are not able to show or modify cookies from other domains. You can check these in your browser security settings.

These cookies collect information that is used either in aggregate form to help us understand how our website is being used or how effective our marketing campaigns are, or to help us customize our website and application for you in order to enhance your experience.

If you do not want that we track your visit to our site you can disable tracking in your browser here:

We also use different external services like Google Webfonts, Google Maps, and external Video providers. Since these providers may collect personal data like your IP address we allow you to block them here. Please be aware that this might heavily reduce the functionality and appearance of our site. Changes will take effect once you reload the page.

The following cookies are also needed - You can choose if you want to allow them: